Microbes
As the name suggests, microbes are microscopic organisms. Most microbes are usually prokaryotic, as is the case with bacteria and archaea,  but some fungi and even animals can also qualify as microbes. Sadly, microbes tend to get a bad rap- most people falsely believe that all microbes are harmful and should be eradicated to be improve human health. The truth is that microbes have a wide variety of roles and relationships with other organisms including humans. Some microbes, like those that constitute our normal flora, form mutualistic relationships with their host. As sophisticated as our digestive system is, we would be unable to break down most of the foods we eat without the assistance of our normal flora- the resident bacteria that inhabit our intestines. These bacteria, including E. coli, receive a safe place to live and exchange help digest food and provide vital nutrients to their hosts. For example, the idea that termites can digest wood is actually false. It is the microbes living in the guts of these termites that are capable of breaking down cellulose.

But of course, not all microbes are "good," some can be extremely dangerous. Virulent or pathogenic microbes cause disease as is the case with the Influenza virus which killed more Americans from 1918-1919 than died in WWI, WWII, Korean War, Vietnam War and Iraq Wars combined. For some microbes, like Influenza, causing disease is their primary function because this is how the microbe reproduces, but some microbes are only bad when they are misplaced. For example, Staphylococcus aureus is a gram-positive bacteria that typically inhabits the respiratory tract of humans. In fact, most of you contain colonies of Staph. aureus growing in your epidermis or skin, regardless of how often or how long you scrub your hands for. Fear not, Staph. aureus is harmless and actually prevents other microbes from colonizing your body; its survival of the fittest and Staph. aureus does not want to lose its home/habitat to an invasive species. However, a danger arises when Staph. aureus is moved a part of the body it is not normally found in and causes an infection. This can happen when a laceration or tear forms in the skin and allows the bacteria to enter the blood stream and colonize various organs.  Not the once benign bacteria becomes pathogenic and can actually kill the host it once loved and defended so dearly.

Many pathogenic microbes require another organism, known as a vector, to help move them from one host to another. The microbe does not harm the vector and the interaction is generally commensalistic. Common vectors include mosquitoes (West Nile Virus), ticks (Lyme Disease) and raccoons/rodents (Rabies Virus). Often management of these diseases focuses on the vector; if the vector population can be reduced or eliminated the disease will follow with it.
Viral Infections​
Viruses infect cells in one of two major ways: lytic infections and lysogenic infection depending on what the virus does after invading the host cell. Outside of a host, viruses exist as independent particles called virions. As a group, virions can infect all forms of life, but each individual virion has been fine tuned to infect only a narrow range of host cells, usually within a single species. This because in order for the virion to infect the host cell it must possess specialized proteins that react with receptor proteins on the surface of the host cell. Once the virion attaches to the host cell, it inserts its genome into the cell. The infection will proceed differently depending on whether it is lytic or lysogenic. 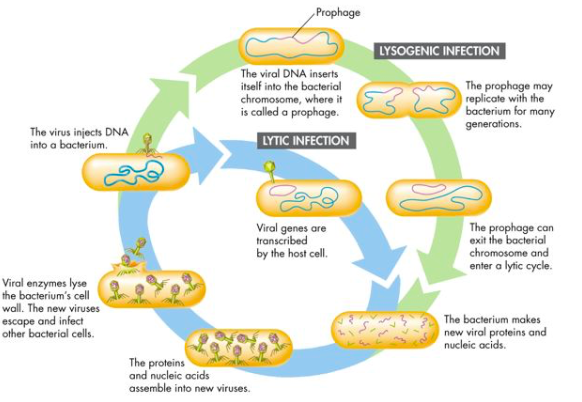 A lytic infection is the fastest and most active type of viral infection. This type of infection begins with the transcription of the viral genome into mRNA, which is then used to develop viral proteins and nucleic acids (could be DNA or RNA depending on the virus type).  These viral proteins and nucleic acids are then used to assemble to hundreds of new virus particles. Eventually the cell lyses (hence the name) or opens up, releasing the new viruses, which will go on to inject more host cells.

Lysogenic infections are cyclic; they start in the lysogenic phase, but are completed in the lytic phase. This is because all virus must replicate and spread from their host to survive. In a lysogenic infection, the viral genome enters the host cell as it would in a lytic infection, however instead of immediately being transcribed into an mRNA transcript, the genome is instead integrated into the host cell's genome. The viral DNA is now referred to as a prophage and can remain dormant within the host cell for years. The host cell is largely unaffected by the prophage and continues about its normal duties, including cell division. With each cell division, the prophage replicates as well. Eventually, the prophage will become active and transition out of the lysogenic phase, starting a lytic infection.

Bacteriophages, viruses that infect bacteria, predominately follow display lytic infections, but can also cause lysogenic infections. Closer to home, the Influenza virus generates lytic infections, attacking the cells of human respiratory systems. The virus moces quick and can cause host cells to lyse in about 8 hours. However, HIV follows a different playbook entirely, generating lysogenic infections that eventually transition into the lytic phase. HIV can remain dormant for a decade before emerging to wreak havoc as it enters its lytic phase. By then, it is often too late for an infected individual as many of the host's cells are already infected by the dormant prophage, much like a sleeper agent.
​
Influenza, HIV and Retroviruses
Influenza is a virus that causes the flu. The Influenza virus can infect humans, birds, dogs and pigs and can be especially dangerous when it jumps from one host to another.